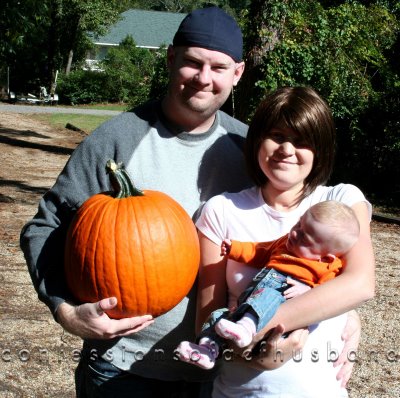 (Photo from Confessions of a CF Husband)

It’s been awhile since I’ve blogged about the Lawrenson family.

In case you don’t know the Lawrenson’s story, Tricia has cystic fibrosis. Last September, Tricia found out they were expecting their first baby. This news came RIGHT before they were to head to Durham, North Carolina, for Tricia to begin the process to be put on the list for the double lung transplant she needed to save her life. In January, Tricia delivered a baby girl more than 3 1/2 months before her daughter’s due date. Gwyneth Rose will be nine months old on Wednesday and is doing well.

In early April, Tricia received a double lung transplant and was released from the hospital less than three weeks later. In mid-May, Gwyneth was released from the hospital. At the end of May, they returned to their home on the Outer Banks of North Carolina. Around that time, they found out that Tricia has a form of cancer common in transplant patients. The cancer happens to be in her lungs, but is NOT something that could have been in the lungs she received. If I understand correctly, this particular cancer just happened to land in her lungs. She underwent one round of “milder” chemotherapy, which wasn’t successful. Then she went onto the REALLY strong stuff for several more treatments.

They were supposed to travel back to Durham today for some follow-ups for both Tricia and Gwyneth, including test to see how Tricia’s cancer responded to the chemo. They’re headed back to Durham today, but Tricia is really sick… She’s suffering from some sort of sinus problems, complete with drainage, which is causing her to cough up all “stuff.” Unfortunately, today she was having trouble breathing and was unable to cough up the yuck. They were headed straight to the hospital to see what was going on. Nate said it’s possible she would be admitted. I haven’t seen any updates from Nate since his earlyish morning post. Please pray for this sweet family.

You can check Nate’s blog, Confessions of a CF Husband, for the latest.

4 thoughts on “Tricia, Nate and Gwyneth need your prayers…”