Ed has wanted to go to Cloudland Canyon State Park forever. Actually, we went last year, but for reasons I can’t remember, we weren’t able to really hike.

The park is about three hours from our house, so I haven’t been much inclined to go. However, my parents went last weekend and reported it was GORGEOUS. So, I decided to surprise him, and we went yesterday.

I was pooped after the five-mile hike. We were glad we hadn’t brought the dogs, as it was pretty strenuous, and we have old dogs. In fact, parts of it reminded me of the Panther Creek hike. There were some STEEP drop-offs, which made me nervous, especially on the way back when I was so tired. When I get tired, I get stupid — and clumsy.

Next, we went back to Rock City. It was also gorgeous.

(This self-portrait was taken on the swinging bridge. A couple of years ago, I took one with our shadow on the rock in the photo above this one. You can see that photo here. Also, the “pooch” you might notice? It’s my terribly attractive fanny pack/two sweatshirts tied around my waist, NOT a baby bump. 🙂

You can see the rest of my photos from the day on Flickr. These are also my Weekly Winners. Go see Lotus for more. 🙂

I pass a beautiful church every day on my way home from work. Yesterday, I gasped when I saw how amazingly gorgeous the light was with the fall leaves. So, today I grabbed my camera and stopped by. I was thrilled with what I captured.

And this? This is my favorite.

Here are a few more.

Toby sleeps on my side of the bed. Between his wiggling and snoring, I usually spend a lot of time maneuvering around him and pretending Toby’s one big white-noise machine.

…and was still there about 10 hours later when we got up.

I’ve known Toby’s loved pillows since the night I met him almost nine years ago. It never occurred to me that he might SLEEP on one all night. I think I’ll put an extra one at the foot of the bed tonight and see what happens. 🙂

I am an editor. While much of my work is done on the computer, each month during the three or four days before we send the publication to the printer, I do a fair amount of editing with pen and paper.

I use green pens for my editing. Today, however, I had to dust off the red pen for a project. It had been years since I’d used a red pen to edit.

Apparently, the red pens were mad as hell and not going to take it anymore. They attacked.

(These photos were taken once I got home after several hand-washings.)

Red Pen Number Three was also leaky, but not quite as messy.

When we were walking to the car after work, My friend Sarah said, “Oh my gosh! What happened to your hair. You’re bleeding!”

Yes, at some point, I ended up getting red ink in my hair.

Tomorrow, it’s back to green pens for me. I don’t think it’s a good idea to encourage the bad behavior of pens.

In addition to not blogging much (at all), I’ve not been taking many photos. Last Saturday, however, I was suddenly all sorts of inspired at the Atlanta Botanical Garden.

When I finally got around to uploading them today, I realized that apart from one photo I uploaded to Flickr when Toby passed his Canine Good Citizen test in June, the last time I uploaded photos was MARCH — my cousin’s wedding when I was the photographer. That it had been so long shouldn’t have been shocking since I knew I hadn’t taken photos off my card since March. And, I went two months between taking photos with my SLR (though I took a few with my point and shoot). But it still was somehow…

Here are a few of my favorites from last Saturday (assuming I can remember how to embed photos in a post, and I’m not even kidding). 🙂

(I shot this photo of a Splendid Leaf Frog through glass, so I am particularly pleased with how it came out.)

I cropped a couple of these (the first one for sure, and MAYBE the third), but I didn’t do any other editing. With the exception of the first shot, all were shot using a telephoto lens. As close as I was to the water, I’m really surprised I didn’t fall into the pond. All it would have taken was someone brushing up against me accidentally.

Since it’s been so long, I’ll say that we’re all well in the Casa de Ramblings by Reba. I ran my 5K I mentioned in April and then ran/walked the Peachtree Road Race on July 5. I also injured my calf at the Peachtree, which I’m STILL recovering from (so no running since then, except for an ill-fated mile when I thought I was better — ha). Work is good, but crazy. My 10-year work anniversary is next month. Ed is good. Dogs and cats are good. My nephew Francis, who I saw last December for the first time in more than three years, skipped kindergarten entirely and is a first grader.

What’s up with you?

(Edited to add: even though these photos were taken LAST week, I’m going to use them for Lotus’s Weekly Winners. I had some technical difficulties last week, which is why I didn’t get them up for the actual week of Weekly Winners.)

I don’t have his response — or any of the e-mail from the time we were dating. But I’m sure you can figure out his answer. 🙂

(If you’ve not read any of this before, you can read more about how we met here and here.)

Ed is a HUGE fan of “Lost.” Me, not so much, though I did live blog the season finale two years ago.

Needless to say, Ed is camped out in front of the t.v. watching all four-and-a-half hours of the finale-night festivities. However, because of a DVR quirk, the t.v. changed briefly when the season finale of “The Simpsons” started recording.

Before we flipped it back, I caught that Bart wrote this on the chalkboard: “End of ‘Lost.’ It was all the dog’s dream. Watch us.”

The big news is that I’ve taken up running. I KNOW! It surprised me, too. 🙂

On March 21, when I was horribly sick with a sinus infection and double ear infection (but didn’t know it yet), I was apparently also delirious and decided to sign up for the Peachtree Road Race on July 4. The Peachtree is a 10K (6.2 miles).

In addition, I live in Georgia. It is HOT on July 4 in Atlanta. And humid.

I don’t move much in the summer when it’s hot and humid, MUCH LESS RUN!

But, I was signed up with 55,000 of my closest friends, and there are always thousands who want to run, but who can’t get registered before it fills up.

So, I needed to train. I asked around and got a couple of recommendations for Couch to 5K. Looked doable. So I made my plan: I’d run half of the Peachtree (3.1 miles, or 5K) and walk the rest. I didn’t want to stress myself out with something that was supposed to be fun.

I bought running shoes from Big Peach Running Company on March 26 (the day my Curves closed, sadly). On March 31, I began. That first day, the program called for alternating 60 seconds of jogging and 90 seconds of walking for a total of 20 minutes, not counting 5 minutes to warm up and another 5 to cool down. I wasn’t sure I could do it, but I did. Today, on Week 5, Day 1 of the program, I did three 5-minute jogging sessions with a 3-minute walk after the first and second run, and a 5-minute warm up and cool down. I had FUN!

Before last week, when 5-minute runs were first introduced, I don’t know that I’d ever run five minutes in a row in my life. Today I had fun while doing it. Unbelievable.

When I finish with this program, I’ll run a 5K (though a “practice” 5K is where I’ll do my 20 minutes Saturday and then walk the rest). I’ll do another training program to get me ready for a 10K. I don’t think I’ll be quite ready to run the Peachtree, but I’ll be able to run well over the half that was originally my goal.

And if I like the Peachtree? I’ll do a 10K and run the whole thing and then sign up for the Atlanta Half Marathon (13.1 miles) on Thanksgiving Day 2010.

Me: a runner. Go figure.

Edited to add: About two weeks after I started, Ed decided the Couch to 5K program sounded good to him. He’s “not a runner” either, but saw that it was doable and decided to try. He’s just starting Week 3 of the program and is doing GREAT! In fact, I think it’s highly likely that he’ll leave me in his dust before it’s all over. 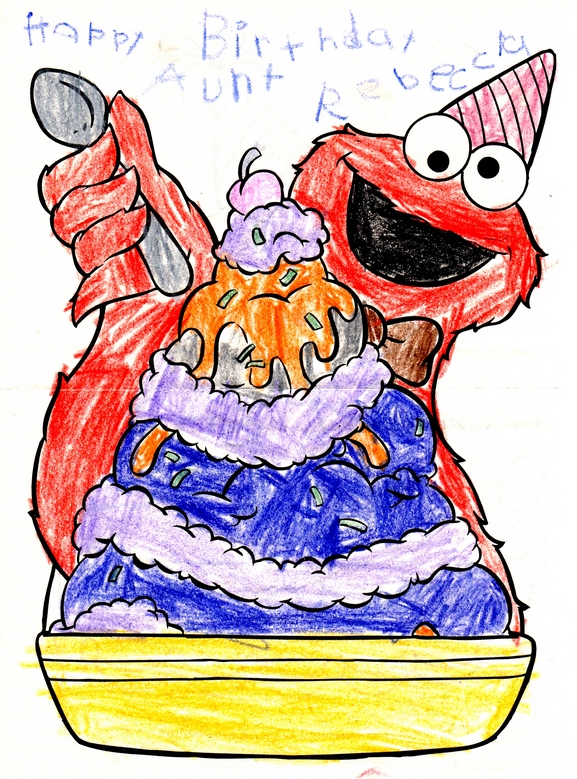 Today is my 35th birthday. This colored page from my 5-year-old nephew Francis arrived in Monday’s mail — the best birthday greeting EVER!

The phone rings at work. The name of the restaurant where Ed and I ate dinner on his birthday last May 30 pops up in the caller ID.

Me (answering phone, but thinking the call must be intended for another department, which sometimes orders food for meetings): This is Rebecca.

Caller: This is “Peter” at [restaurant]. I have your purse.

YUP. The purse I assumed had been stolen when it didn’t turn up after I left it at a restaurant almost 10 months ago? It turns out that it was locked up in the restaurant’s office all this time, apart from the undetermined amount of time it spent in the restaurant’s Lost and Found. The general manager was cleaning out the drawer today and found my purse.

Everything was still there. So, I’m about $50, $23 in Target gift card, $5 in Wal-Mart gift card and $5 in Starbucks gift card “richer.” Also found? Now-replaced credit cards, office security card, and various receipts from my therapist, not to mention assorted bits of purse detritus.

So all I’m out is the $25 to replace my security card at work and some finance charges, the result of Ed’s not realizing he was getting the wrong e-bill from one of my card companies and, therefore, not paying the bill. (The late payments didn’t show up on my credit report — at least not so far — which is excellent.)

I am thankful that my stuff really WAS safe all this time… just not with me.